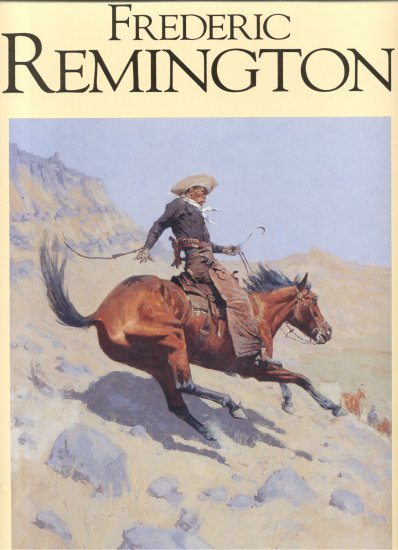 In his lifetime, from the Civil War to the turn of the century, Frederic Remington was keenly aware that the Wild West was fast vanishing, and he was determined to seek his fortune while experiencing the adventure of frontier life. However, he would not make his fortune in business, ranching, or prospecting; his gold lay in his passion for drawing, painting, and sculpting romantic images of the restless spirit of the West.

One of the best-known western artists, Remington left a legacy of artwork that helped form the world's perception of a discrete period in America when cowboys herded cattle on the open range, Indian tribes hunted buffalo and practiced age-old rituals, and the U.S. cavalry battled the Indians for territorial supremacy.

Since childhood, Remington had a passion for horses, the military, and the great outdoors, which led him to traverse the Oregon and Santa Fe trails and explore remote, treacherous terrain pioneered by legendary figures, Kit Carson and Jedediah Smith. He befriended rugged characters, spending time with Indian tribes including the Comanche's, riding with cowboys on wagon trains and on horseback, and joining army expeditions in pursuit of Geronimo and Sitting Bull.

During his travels, Remington amassed a huge portfolio of sketches, which launched his reputation as an illustrator in the East. His drawings appeared in such magazines as Harper's Weekly and Century, and in such books as Theodore Roosevelt's Ranch Life and the Hunting Trail. Although Remington received only a brief formal training in art, he characteristically persevered in attaining recognition as a serious artist.

By 1895, in garnering acclaim with his ambitious first sculpture, Broncho Buster, he fulfilled his ambition of elevating his reputation to that of fine artist. Thereafter, some of his most famous paintings were produced, such as The Fight for the Waterhole and His First Lesson, which exemplify his realistic, detailed style.

His later, more impressionistic paintings include brilliant sunlit scenes, like The Buffalo Runners, Big Horn Basin. His melancholy, somewhat eerie moonlit nocturnal, like the Luckless Hunter, reflect Remington's nostalgia for the disappearing frontier. With nearly 70 FULL-COLOR and 25 B/W illustrations, this volume exhibits some of the finest Remington drawings, paintings, and sculpture, which are part of an invaluable record of America's last frontier.

Buyer pays $6.00 Shipping in Continental U.S. **Payment must be received within 10 days of the end of the auction, unless other arrangements are made. Checks held till clear. Money Orders & Paypal Payments shipped on receipt. Buyer Must Request Insurance at Additional Expense for $1.40 for up to $50. IL residents Must add 7.25% sales tax.