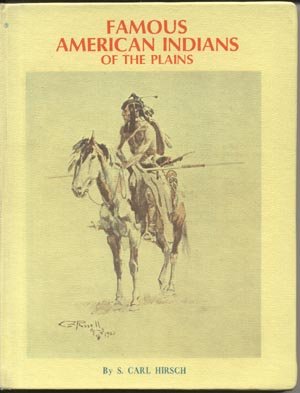 FAMOUS INDIANS OF THE PLAINS covers the life of American Indians on the Great Plains, how their lives changed, and how that affected the history of our nation, the United States of America.

"Call out the roll of American Indians. Among them you may single out the most famous of all-the Indian of the Great Plains." "His star rose like a meteorite over the wind-combed prairie. It flared briefly, and died."

So begins S. Carl Hirsch's dramatic retelling of one of the most fascinating and often bitter chapters in the history of mankind. In the brief span of a hundred years every aspect of the lives of these Plains people changed completely. From poor, earth-grubbing tribes living in settled villages on the fringes of the Great Plains they became in a remarkably short time the wide-ranging, free-spirited "Buffalo Indians"-the ideal of the American Indian as pictured in everyone's mind.

It was the coming of the horse that brought this change. As horses were lost, strayed, or stolen from the Spanish settlements to the south, the various tribes were able to tame them and to move out onto that great sea of grass which held a seemingly bottomless larder-the vast herds of buffalo. With their horses the Plains Indians could now follow the buffalo at will, and their lives became exciting and colorful. It was a life on horseback, and mounted, like the knights of old, they became a proud, warlike people-- the chivalry of the Plains.

This was their world, a world-as N. Scott Momaday, himself a full-blooded Kiowa, says in his foreword- "full of motion and meaning, worth looking."

Buyer pays $4.85 Shipping in Continental U.S. **Payment must be received within 10 days of the end of the auction, unless other arrangements are made. Checks held till clear. Money Orders & Paypal Payments shipped on receipt. Buyer Must Request Insurance at Additional Expense for $1.40 for up to $50. IL residents Must add 7.25% sales tax.