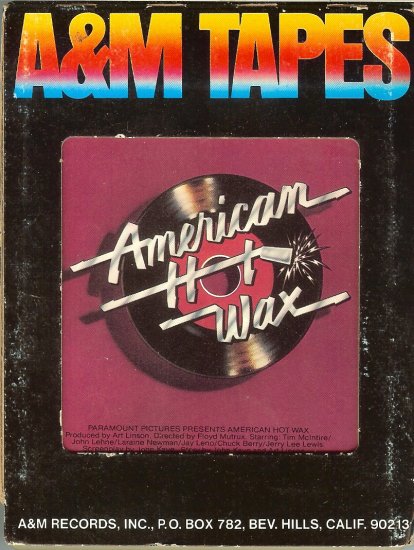 Tweet
Released in 1978 on LP, 8-track tape, and cassette, this package does not seem to be available on CD, and is, naturally, out of print. Copies do turn up periodically in used record stores and on-line auctions. The movie was a fictionalized version of the Alan Freed story, with a lot of accuracy sacrificed on the altar of "theatre," but still plenty of fun.

John Charles Marion's review sent me on a quest to dig out my copy. The prize here is the first disc of the 2 LP set - the REAL "soundtrack" portion, which contains songs from the movie, but in their entirety - not just the partial performances that made it to the screen. The second LP is essentially just another "typical oldies" LP with original recordings by the original artists, nothing to sneeze at, but readily available in other packages.

Besides the "made-up" groups and artists - Prof. LaPlano and the Planotones ("Prof. LaPlano," of course, is Kenny Vance, who also produced the album package, and later carried the Planotones into a career as a "neo" doo wop group), the Delights (NOT the There'll Be No Goodbye 5 Delights, but a female group led by Brenda Russell, who would go on to a musical career as a solo act in the 1980s and early 1990s), "Clark Otis," the Chesterfields, and Timmy and the Tulips - "live" performances by Chuck Berry, Secramin' Jay Hawkins and Jerry Lee Lewis make this a "fun" disc to spin. Chuck does his somewhat risqué version of Reelin' And Rockin', just as if you were REALLY at the Paramount - "...We boogied in the kitchen and We boogied in the hall, I boogied on my finger but I wiped it on the wall..." the Chess brothers wouldn't have released this version to the "Top 40" stations back when.

Really gives you the feeling of "being there" at a Freed show circa 1956. Comes with splice, pads and a 7 day money-back guarantee.
... [Full Description]