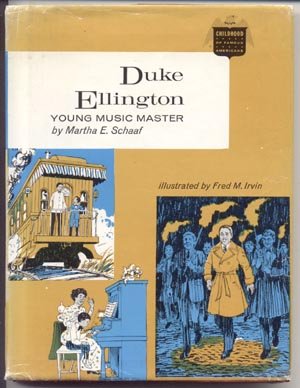 Edward Kennedy Ellington, later known as Duke Ellington, was born in 1899 in Washing- ton, D. C. As a small boy, he often kept time with his building blocks while his mother played a nearby piano. Later when he wanted to play baseball with the neighborhood boys, his mother insisted that he start taking piano lessons.

During his boyhood Edward roamed about with a slightly older cousin to visit relatives in different parts of the city. From these roamings, he came to know much about Washington as the capital of our country.

In his early school days. he wanted to be- come a baseball player, but took training in high school to become an artist. In the mean- time he kept on taking piano lessons, but not until he learned ragtime music did he seriously consider becoming a musician.

While he was still a teen-ager he organized a small band to play at dances, parties, and other social events. This band, which he called The Washingtonians, became popular almost overnight. One evening a friend of his took him to a party, as an uninvited guest, introduced him as Duke Ellington, and announced that he was a talented musician who would be glad to play the piano. From then on for the rest of his life, he was known as Duke.

In the 1920's Duke Ellington took his small band to New York. At first he found it difficult to compete with larger bands and orchestras but gradually succeeded. For years he played at the Cotton Club, from which he broadcast popular radio programs to all parts of the country.

During the coming years Duke became an outstanding orchestra leader. He and his orchestra traveled widely to put on concerts both in the United States and abroad. They appeared frequently on television and helped to make several motion pictures.

Duke was a talented natural-born musician. He was a composer as well as a player and wrote numerous popular selections such as "Mood Indigo," "Solitude," and "Sophisticated Lady." In his later years his son Mercer, also a talented musician, joined his orchestra and became its manager.

The author of this volume, Martha E. Schaaf, has written one other popular volume in the Childhood of Famous Americans Series. In writing this book she has provided a carefully researched story of the life of a great American Negro. Children will enjoy reading this delight.


Buyer pays $3.95 Shipping in Continental U.S. **Payment must be received within 10 days of the end of the auction, unless other arrangements are made. Checks held till clear. Money Orders & Paypal Payments shipped on receipt. Buyer Must Request Insurance at Additional Expense for $1.40 for up to $50. IL residents Must add 7.25% sales tax.