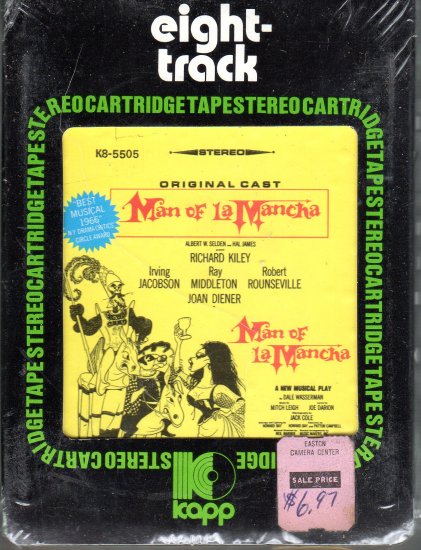 Tweet
a musical with a book by Dale Wasserman, lyrics by Joe Darion and music by Mitch Leigh. It is adapted from Wasserman's non-musical 1959 teleplay I, Don Quixote, which was in turn inspired by Miguel de Cervantes's seventeenth century masterpiece Don Quixote. It tells the story of the "mad" knight, Don Quixote, as a play within a play, performed by Cervantes and his fellow prisoners as he awaits a hearing with the Spanish Inquisition.

The original 1965 Broadway production ran for 2,328 performances and won five Tony Awards, and the musical has been revived four times on Broadway, becoming one of the most enduring works of musical theatre.

The signature song, "The Impossible Dream", became a standard. The musical has played in many other countries around the world, with productions in German, Hebrew or Japanese, Icelandic, Gujarati, Uzbekistani, Magyar, Slovenian, Swahili, Finnish, Ukrainian and nine distinctly different dialects of the Spanish language.
Man of La Mancha was first performed at the Goodspeed Opera House in Connecticut in 1964, and had its New York premiere on the thrust stage of the ANTA Washington Square Theatre in 1965.