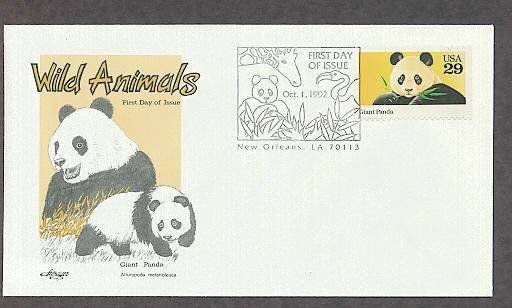 The Only United States Postage Stamp Issued Recognizing the Panda. The giant panda (Ailuropoda melanoleuca) is also known as the panda bear, bamboo bear, or in Chinese as Daxiongmao, the "large bear cat." In fact, its scientific name means "black and white cat-footed animal."

Giant pandas live in dense bamboo and coniferous forests at altitudes of 5,000 to 10,000 feet. The mountains are shrouded in heavy clouds with torrential rains or dense mist throughout the year.