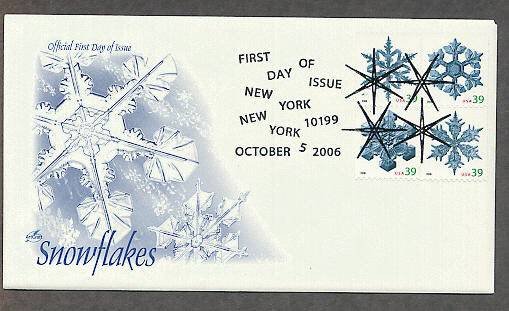 Snowflakes stamps are photographs of two basic snowflake patterns by physicist Kenneth Libbrecht. They are stellar dendrites, which form branching treelike arms, and sectored plates, which as their name suggests, form platelike arms. Because fallen snowflakes start to melt and lose their shape in mere minutes, Libbrecht quickly transferred the snowflakes from cardboard to a glass slide using a paintbrush. He then snapped the photos inside a temperature-regulated enclosure using a digital camera attached to a high-resolution microscope. USPS