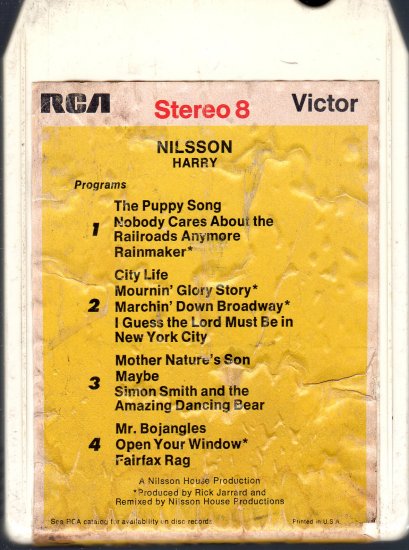 Tweet
Harry Edward Nilsson III (June 15, 1941 – January 15, 1994), who sometimes went by the stage name Nilsson, was an American songwriter who achieved the peak of his commercial success as a singer in the mid 1970s. On all but his earliest recordings, he is credited as 'Nilsson' and for the hit singles "Without You", "I Guess The Lord Must Be In New York City", "Everybody's Talkin'" and "Coconut". As a songwriter, Nilsson was much in demand and his songs including 'One' and 'Cuddly Toy' have been covered by various artists including the Monkees, Three Dog Night and Aimee Mann. His musical legacy continues and his tunes are featured on the soundtracks of dozens of films and TV programs, spanning the 1960s through to the present-day. He was awarded Grammy Awards for two of his recordings.

Nilsson's personal and musical style can best be described as witty and idiosyncratic. Arguably one of the most talented male singers of his generation, he possessed a very emotive, warm voice and a striking vocal range. However he failed to build on his early commercial success, preferring instead to switch musical styles over time ranging from rock to children's songs to nostalgia. His premature death is attributable in large part to his earlier partying lifestyle and health problems exacerbated by financial worries. His financial adviser embezzled most of his fortune leaving him in considerable debt just prior to his death.

Harry Nilsson’s third album for RCA was Harry, released in August 1969. It was his first album to get onto Billboard Magazine's Billboard 200 chart, reaching #120 and remaining there for 15 weeks.

The album has no one distinctive style but ranges over ballads, show tunes, nostalgic Americana, and tin pan alley-like soft shoe numbers.

William E. Martin, who wrote the songs “Fairfax Rag” and “City Life” that Harry covered on Harry, and who collaborated with Nilsson on the song “Rainmaker,” appears in a picture inside the album wearing a bear suit that was made of an actual bear.