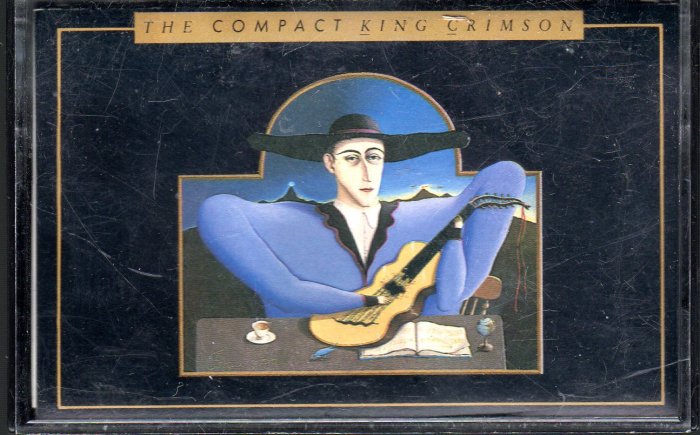 Tweet
an English rock band, founded in 1969 by guitarist Robert Fripp and drummer Michael Giles. Typically categorised as a foundational progressive rock group, the band have in fact incorporated diverse influences and instrumentation during their long history, drawing from jazz, classical and experimental music to psychedelic rock, heavy metal, new wave, hard rock, gamelan, folk music, electronica and drum and bass. Originating in England, the band has had a mixture of English and American personnel since 1981.

King Crimson garnered little radio or music video airplay but gained a large cult following. The band's debut album, In the Court of the Crimson King, is widely regarded as a landmark in progressive rock, while later excursions into even more unconventional territory have been influential on many contemporary musical artists. King Crimson's membership has fluctuated considerably throughout its existence, with eighteen musicians and two lyricists passing through the ranks as full band members. The band developed a greater degree of stability later on in its history, with current (and fifth) frontman Adrian Belew having been a member of King Crimson since 1981 and drummer Bill Bruford staying with the band for nine years of active existence (1972–74, 1981–84 and 1994–97).

Today, King Crimson's early music is considered to owe a lot to the compositional frameworks of jazz innovators like Charles Mingus and John McLaughlin, fused with British pop and classical music. The early 1970s were King Crimson's least stable period, with many personnel changes and disjunctions between studio and live sound as the band explored elements of jazz, funk and chamber classical music. In the mid-'70s the band had a more stable lineup and developed an improvisational sound influenced by hard rock, before breaking up in 1974. The band re-formed with a new line-up in 1981 for three years (this time influenced by New Wave and gamelan music) before breaking up again for around a decade. Following their 1994 reunion (with extra personnel), King Crimson blended aspects of their 1980s and 1970s sound with influences from more recent musical genres such as industrial rock and grunge (the latter itself a genre initially influenced by King Crimson). The band’s efforts to blend additional elements into their music have continued into the 21st century, with more recent developments including drum and bass-styled rhythm loops and extensive use of MIDI and guitar synthesis.