Stevie Nicks - The Other Side Of The Mirror Cassette Tape 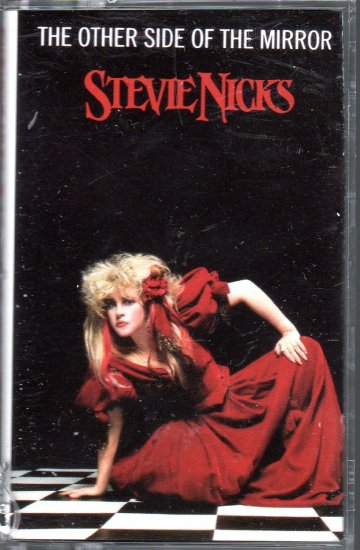 Tweet
The Other Side of the Mirror is the fourth studio album by American singer-songwriter and Fleetwood Mac vocalist Stevie Nicks.

Released in May 1989, it was recorded partly in The Netherlands, partly in Buckinghamshire in England, and partly in Los Angeles, and is loosely based around the theme of Alice's Adventures in Wonderland. The album reached #10 on the U.S. Billboard albums charts, propelled by the hit single "Rooms on Fire" (#16), and eventually achieved platinum status.

Following the huge success of Fleetwood Mac's Tango in the Night in the UK, The Other Side of the Mirror became Nicks' highest charting solo album there, reaching #3 and spawning her first UK top 40 hit with "Rooms on Fire" (also #16). Her first, and so far only, solo tour of the UK and Europe, (Sweden, France and The Netherlands) followed the album, as well as a tour of the U.S., though Nicks has famously commented since that she has no recollection of the tours due to her increasing dependency on the prescribed tranquilliser Klonopin at that time.

Other single releases from the album included "Two Kinds of Love", featuring vocals by Bruce Hornsby and instrumental interlude by Kenny G, which became Nicks' first single to fail to chart, missing both the Billboard and Cashbox charts completely. "Long Way to Go" gained substantial airplay, making Billboard's Top Album Tracks chart, and also made the Top 75 in the UK Singles Chart, as did "Whole Lotta Trouble".

Cut-Out - Tested and comes with a 7-day money back guarantee.
... [Full Description]