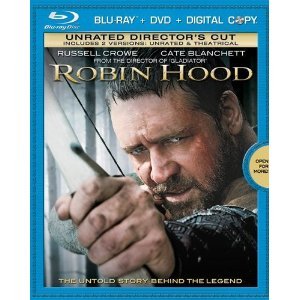 Cast aside all notions of men in tights: Ridley Scott's Robin Hood is decidedly earthier and more grown-up than most romps through Sherwood Forest. The presence of the over-40 Russell Crowe and Cate Blanchett cinches the deal, lending a dose of worldliness to a project that means to be about the origins of the famous character, who in this incarnation was evidently a late bloomer. Robin Longstride (that's his name before he started wearing a hood) is just returned from a 10-year jaunt in the Crusades when he loses his king (Danny Huston as Richard the Lionheart) and his job. Back in England, Robin folds himself neatly into a Nottingham family, where a grieving widow named Marion (Blanchett) and her father-in-law (Max von Sydow) hardly care that he doesn't much resemble their own departed warrior. But the merry men and their famous sideline will have to wait: except for one bit of robbing from the rich (i.e., the greedy government of King John) and giving to the poor, this movie is more concerned with creating a portrait of the royal intrigue that went into creating Robin Hood than in detailing the high jinks of the Nottingham outlaws. And that's not a bad thing, because although Robin Hood lacks the mechanical action beats that distinguish most films of its scale, it creates an engrossing story line around its political chess playing (outlined by screenwriter Brian Helgeland and apparently a few others). Crowe is in reliable crusty-tender form and Blanchett summons up more than her sketchy character probably deserves, but the film has a large cast of chewy, fun performers: Mark Strong (Kick-Ass) does baddie duty as the treacherous pal of King John (preening Oscar Isaacs), William Hurt is stalwart and wise as a royal power broker, Eileen Atkins is a carefully considered royal mum, and Matthew Macfadyen is a Sheriff of Nottingham who's no longer central to the villainy--though no less hissable for his ineptitude (and a prime candidate at film's end for No. 1 bad guy in the sequel). In short, not a Gladiator re-do for Scott and Crowe, but a civilized tale of tyrants and rebels, staged in a pleasingly old-fashioned way. --Robert Horton
-----------------------------------------------------------------
Product Description

Academy Award® winner Russell Crowe and visionary director Ridley Scott (Gladiator) reunite for the untold story of the man behind the legend. In an age of oppression and shameless tyranny, an outlaw becomes the unlikely hero that saves a nation and inspires generations to fight for freedom. In this thrilling action adventure, "Russell Crowe and Ridley Scott are at their most entertaining since Gladiator" (Dan Jolin, Empire (UK). Also starring Academy Award® winner Cate Blanchett.
... [Full Description]

Other Products from libreriavenus (View All)