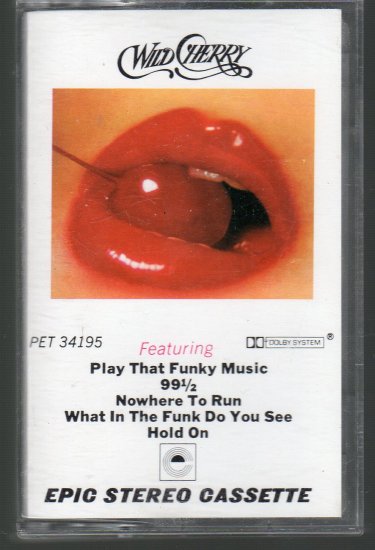 Tweet
Wild Cherry was a funk/rock band which had a great success during 1976 with the funk song "Play That Funky Music."

After the original members broke up, there were other members who also played before the big hit, such as Rob's cousin, Coogie Stoddart - guitar, Lead and background vocals, Joe Buchmelter on Bass, and Buckie Lusk on Bass. Rob, Coogie, Ben, and Buckie were the best of, and also most successful lineup of all until Play That Funky Music.

Several records before Play That Funky Music were released under their own label during the early 1970's, including You Can Be High (But Lay Low), date unknown, and Something Special On Your Mind, 1971. The music at this stage was pure rock music, not funk. Wild Cherry eventually gained a record contract with Brown Bag Records,owned and operated by the late Terry Knight of Terry Knight And The Pack fame, who later on without Terry became Grand Funk Railroad, who Terry also produced at the time for Capitol records. Several demos and singles on Knight's Brown Bag label distributed by United Artists were produced including Get Down, 1973, and Show Me Your Badge, 1973.

The band broke up when a disillusioned Parissi left the music scene to become the manager of a local steakhouse. Rob quickly realized that the steakhouse gig was not going to cut it. As his enthusiasm for the music eventually returned, Rob decided to give the business one last shot.

Parissi re-formed the band with new musicians. The new lineup consisted of Bryan Bassett (guitar/vocals) and Ronald Beitle (drums/percussion/vocals), both from Pittsburgh, Pennsylvania, and Allen Wentz (bass guitar/synthesizer/vocals), who hailed from Detroit, Michigan. As the quartet began to perform non-stop and build a huge, devoted following in the Pittsburgh area, they were repeatedly asked by listeners to play more dance music. Disco was beginning its rule on the radio and the dance floor. At the 2001 Club in Pittsburgh, a table full of black fans kept coming to the stage and teasing: "Are you white boys gonna play some funky music?" One night during a break between sets, drummer Ron Beitle, in a group meeting in the dressing room, uttered phrase: "Play That Funky Music, White Boy". On the way back to the stage to play the next set, Rob Parissi was immediately inspired to write a song around the phrase, on a drink order pad with a pen borrowed from the bartender. The song took a total of 5 minutes to write. When the band went into the studio to record the song, studio engineer Ken Hamann was blown away by the potential hit and brought the band to the attention of Sweet City Records, distributed by Epic/CBS, which then immediately signed the group. Parissi had intended to record the song as the B-side to a cover version of the Commodores' "I Feel Sanctified", but the label suggested it as the A-side. During the recording of the first album, Mark Avsec was hired as a session keyboardist on two of the album's tracks, "Nowhere To Run" and "The Lady Wants Your Money", and was asked to join the band after the album was released and the group was about to embark on its first tour.

"Play That Funky Music" became a huge hit when released in 1976, peaking at number one on both the Billboard R&B and pop charts. Both the single and Wild Cherry's self-titled debut album went platinum. Play That Funky Music was #1 on the Billboard charts for 3 weeks. The band was named Best Pop Group of the Year by Billboard, and received an American Music Award for Top R&B Single of the Year, as well as a pair of Grammy nominations for Best New Vocal Group and Best R&B Performance by a Group or Duo that year, adding to their success.