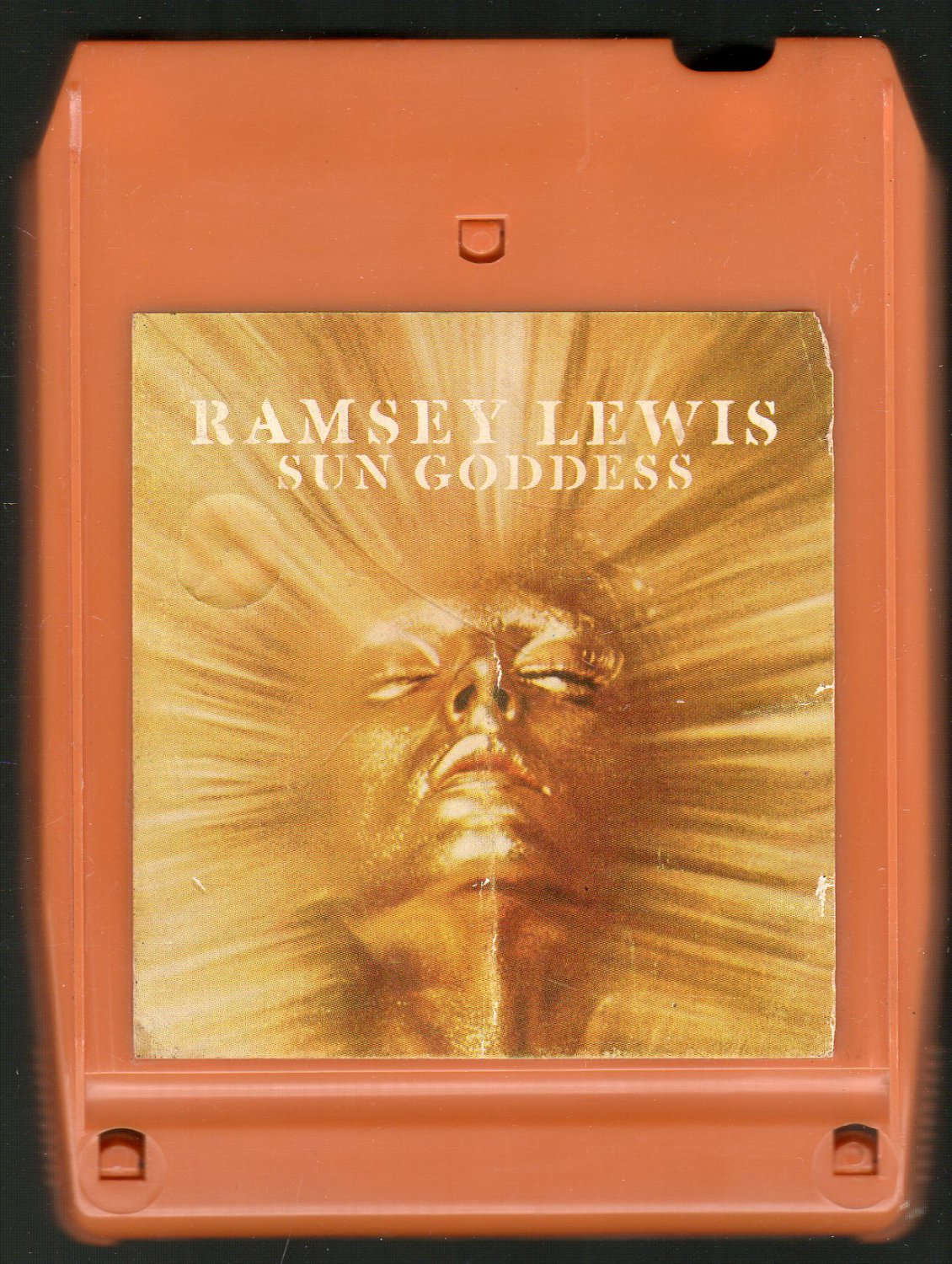 Tweet
Sun Goddess is a 1974 jazz album by Ramsey Lewis.

After his classic acoustic albums in the 1960s, Ramsey Lewis wanted to head into a new musical direction in the then-new decade of the 1970s. He reunited with Maurice White who at that time was with his own band, Earth, Wind & Fire.

The album became a huge cross-over hit, charting #1 on the Billboard Black Albums chart as well as the Jazz album chart. The album also charted #12 in the Pop chart. While the album charted in the top 15, the songs "Hot Dawgit" and "Sun Goddess" charted in the Black Singles, the Pop Singles, and the Disco singles charts. Sun Goddess has been certified gold.

For years the identity of the woman on the album cover, photographed by Herb Breuer, had been a mystery amongst fans, as there was no credit on who the model was. Lewis revealed on his Facebook page in June 2011 that the model was Susan Leigh Scott, now Susan Maxon. Maxon had moved to Seattle, where Lewis was performing during his 2011 Sun Goddess Tour, and decided to attend one of his performances. A photo was taken of the backstage meeting between Lewis and Maxon, which Lewis posted on his page.

Ramsey Emmanuel Lewis, Jr. (born May 27, 1935) is an American jazz composer, pianist and radio personality. Ramsey Lewis has recorded over 80 albums and has received seven gold records and three Grammy Awards so far in his career.

Ramsey Lewis was born in Chicago, Illinois, to Ramsey Lewis, Sr. and Pauline Lewis. Lewis began taking piano lessons at the age of four. At 15 he joined his first jazz band, The Cleffs. The seven-piece group provided Lewis his first involvement with jazz; he would later join Cleffs drummer Isaac "Redd" Holt and bassist Eldee Young to form the Ramsey Lewis Trio. Lewis is a graduate of DePaul University.

The trio started as primarily a jazz unit and released their first album, Ramsey Lewis And The Gentlemen of Swing, in 1956. Following their 1965 hit "The In Crowd" (the single reached #5 on the pop charts, and the album #2) they concentrated more on pop material. Young and Holt left in 1966 to form Young-Holt Unlimited and were replaced by Cleveland Eaton and Maurice White. White left to form Earth, Wind & Fire was replaced by Maurice Jennings in 1970. Later, Frankie Donaldson and Bill Dickens replaced Jennings and Eaton; Felton Crews also appeared on many 1980's releases.

By 1966, Lewis was one of the nation’s most successful jazz pianists, topping the charts with "The In Crowd", "Hang On Sloopy", and "Wade in the Water". All three singles each sold over one million copies, and were awarded gold discs. Many of his recordings attracted a large non-jazz audience. In the 1970s, Lewis often played electric piano, although by later in the decade he was sticking to acoustic and using an additional keyboardist in his groups.

In addition to recording and performing, Lewis hosted a morning show on Chicago "smooth jazz" radio station WNUA (95.5 FM) until May 22, 2009. His weekly syndicated radio program Legends of Jazz, created in 1990, features recordings from artists such as David Sanborn, George Duke, Herbie Hancock, Charlie Parker, Dizzy Gillespie, Kurt Elling, Al Jarreau and Miles Davis. The show can be heard in 60 U.S. cities and overseas. In 1994, Lewis appeared on the Red Hot Organization's compilation album, Stolen Moments: Red Hot + Cool, alongside other prominent jazz artists, Herbie Hancock and Roy Ayers. The album, meant to raise awareness and funds in support of the AIDS epidemic in relation to the African American community, was heralded as "Album of the Year" by Time Magazine.

On December 4, 2006, the Ramsey Lewis Morning Show became part of Broadcast Architecture's Smooth Jazz Network, simulcasting on other Smooth Jazz stations across the country for the first time. However, the show was still based in Chicago until it was cancelled when WNUA switched over to a Spanish format.

Lewis is artistic director of Jazz at Ravinia (an annual feature at the Ravinia Festival in Highland Park, Illinois) and helped organize Ravinia's Jazz Mentor Program.[8] Ramsey also serves on the Board of Trustees for the Merit School of Music, a Chicago inner-city music program and The Chicago High School for the Arts, the new public arts high school in Chicago. Early in 2005, the Ramsey Lewis Foundation was created to help connect at-risk children to the world of music. As an offshoot of that foundation, Lewis plans to form a Youth Choir and Youth Orchestra. In January 2007, the Dave Brubeck Institute invited Lewis to join its Honorary Board of Friends at the University of the Pacific in Stockton, California. Lewis is an Honorary Board member of the Chicago Jazz Orchestra. Lewis is a member of Phi Beta Sigma fraternity. In May 2008, Lewis received an honorary doctorate from Loyola University Chicago upon delivering the keynote address at the undergraduate commencement ceremony.

Lewis still lives in Chicago, Illinois, the city of his musical roots. He has seven children, fourteen grandchildren, and one great-grandchild.