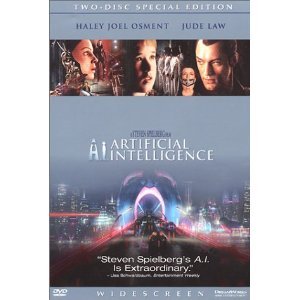 Tweet
- Over 100 minutes of behind-the-scene footage, new interviews, and featurettes
- Spielberg talks about developing the vision of A.I.
- Lucasfilm's Industrial Light and Magic group on the film's special effects
- Stan Winston explains how the robots were brought to life
- Featurette on the sound effects and orchestral score for the film
- Storyboard sequences
- Effects portfolio
- Portrait gallery
- Behind-the-scenes photos with Steven Spielberg
- Production design photos
=====
The two original discs play without flaw. The case and inserts are in new condition, with owner's initials on the inside of the case.
... [Full Description]