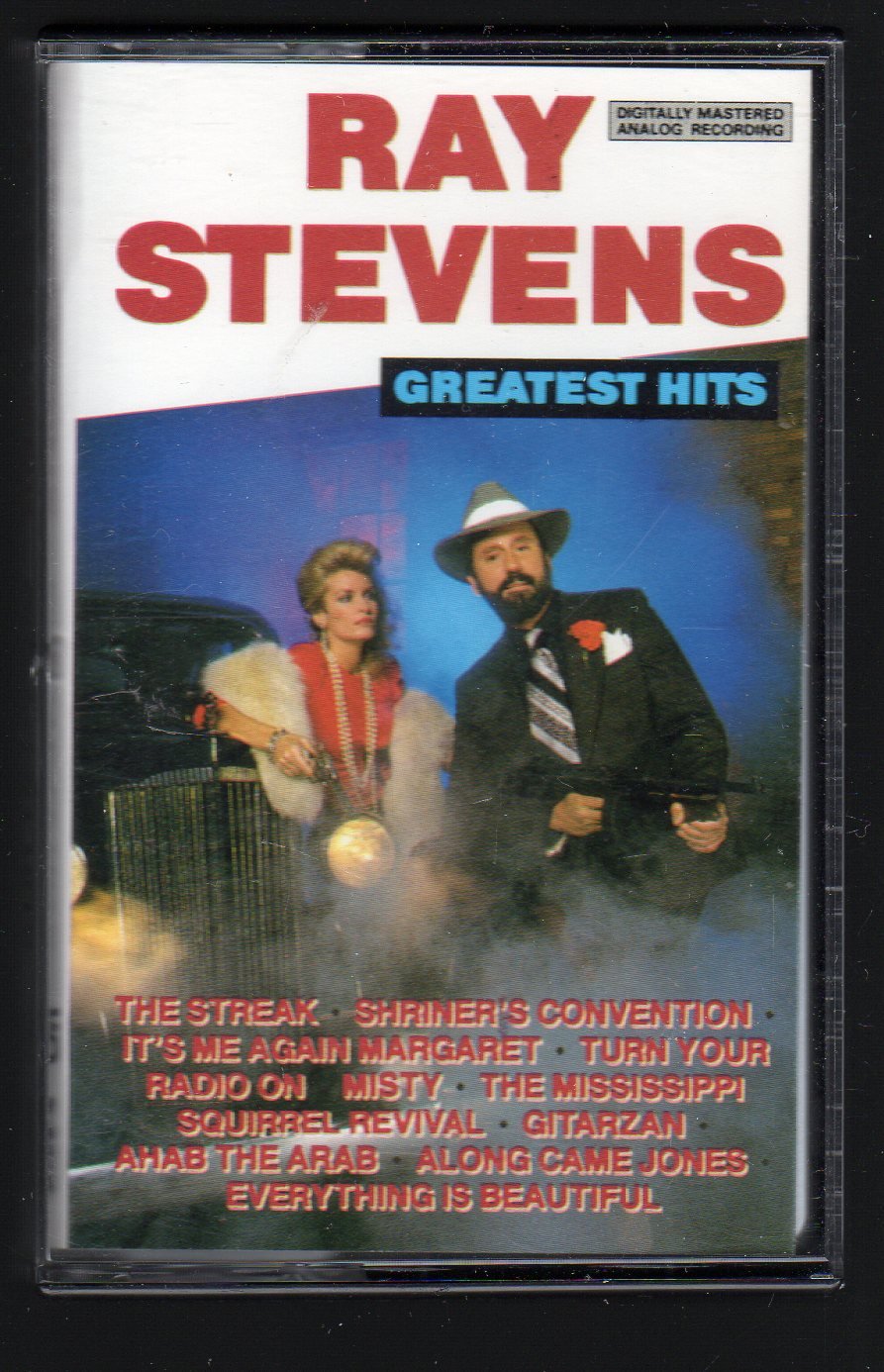 Tweet
Ray Stevens (born Harold Ray Ragsdale, January 24, 1939) is an American country music and pop singer-songwriter known for his novelty songs as well as more serious works. He was born in Clarkdale, Georgia, a small town west of Atlanta. Stevens's music seems to be mostly influenced by traditional country western and gospel music but in his earlier material heavy influences from R&B groups can be heard. He has done a few satire songs using other styles such as I Need Your Help, Barry Manilow; Ned Nostril, Surfin USSR. Many of his novelty songs include long sections of dialog between two people both played by Stevens, such as in The Streak, or between him and an unheard character over the telephone, such as in the Shriners Convention or It's Me Again Margret. Unlike some novelty artists, such as "Weird Al" Yankovic, Stevens has had some successful serious songs, such as Mr. Businessman, Everything Is Beautiful, Turn Your Radio On, and Misty. Stevens' recording career began in the mid-1950s with two singles released on Prep Records. He then signed a contract with Capitol Records with the help of Atlanta, Georgia music maven Bill Lowery. In 1958, Stevens joined Lowery's National Recording Corporation (NRC), playing numerous instruments, arranging music, and performing background vocals for its band. After NRC filed for bankruptcy, he signed with Mercury Records with whom Stevens recorded a series of hit records in the 1960s that included songs such as "Ahab the Arab", "Harry the Hairy Ape", "Funny Man", the original recording of "Santa Claus is Watching You", and "Jeremiah Peabody's Polyunsaturated Quick-Dissolving, Fast-Acting Pleasant-Tasting Green and Purple Pills".

In 1968, Stevens signed with Monument Records and started to release serious material such as "Mr. Businessman" in 1968, a Top 30 pop hit, and "Have A Little Talk With Myself" and the original version of "Sunday Morning Coming Down" in 1969, which became Ray's first two singles to reach the country music charts; Johnny Cash's recording of "Sunday Morning Coming Down" was a hit in 1970. Stevens continued releasing novelty songs, and in 1969 he had a million-selling Top 10 pop hit with "Gitarzan". Stevens also became a regular on The Andy Williams Show during the 1969–1970 season, and even hosted his own summer show (The Ray Stevens Show) in 1970.
Starting in the 1970s, Stevens became a producer and well-known studio musician on the Nashville scene. He recorded hits for Barnaby Records and Warner Brothers during 1970–1979. Stevens' biggest hit in the US was his gospel-inflected single "Everything Is Beautiful" (1970), a plea for love and tolerance. The single won a Grammy, was the theme song for his summer 1970 TV show, and marked his first time in the Top 40 on the country charts, peaking at #39. His other 1970 singles were "America, Communicate With Me" and "Unwind", both minor pop successes. His novelty song "Bridget the Midget (The Queen of The Blues)" made #2 on the UK chart in 1971, but in the US it only reached #50. Ray had a gospel/country hit single in early 1972 with "Turn Your Radio On", reaching the country Top 20. Two more of Ray's songs in 1972 were also minor pop hits, "A Mama and a Papa" and "All My Trials", but both crossed over to the Top 40 Adult-Contemporary lists. In 1973, Stevens had a top 40 country hit with the title track of his album "Nashville". In 1974, Stevens recorded perhaps his most famous hit, "The Streak", which poked fun at the early-1970s fad of running nude in public, known as "streaking". It made No. 1 in both the UK and the USA and No. 3 on the country chart. Ray's tenure with Barnaby came to an end in early 1976, after he had racked up several more hit singles; "The Moonlight Special" is a spoof of the TV program "The Midnight Special". In 1975, he released the Grammy-winning "Misty", which became his biggest country hit (reaching #3 on the country charts and #14 on the pop charts); he also hit the country Top 40 with a doo-wop version of "Indian Love Call", "Everybody Needs a Rainbow", and a ballad version of "Young Love" in early 1976.

In the spring of 1976, Stevens joined Warner Brothers, where his debut was a strong showing with three hit singles in a row. The first was the up-tempo version of "You Are So Beautiful", which reached the country Top 20, then "Honky Tonk Waltz", which reached the Top 30. He then released a novelty single, billing himself as a choir of chickens: under the pseudonym "Henhouse Five Plus Too", Stevens recorded a version of Glenn Miller's "In The Mood" in the style of a clucking chicken; it became a Top 40 hit in the US and UK in early 1977. Ray never made it to the Top 40 throughout the rest of 1977 on either the pop or country charts. In 1978 he had a hit with "Be Your Own Best Friend" on the country charts, and in 1979 he had his final hit, as of 2007, on the Hot 100 pop chart with the novelty "I Need Your Help, Barry Manilow". He joined RCA in late 1979, releasing new material in 1980.
After joining RCA in 1980, Ray continued having hit singles with somewhat less success than in the previous decade. His debut single, the Top 10 "Shriner's Convention" and then the Top 20 love ballad "Night Games" performed relatively well on the charts. In 1981, only one single made the charts, the Top 40 hit "One More Last Chance". In 1982 a few more singles were released, notably the Top 40 "Written Down in My Heart". Stevens left RCA and returned to Mercury Records, the label that made him a star in the early 1960s. This resulted in only one album, the 1983 project "Me", and only one chart hit, "My Dad", in early 1984.

Ray then joined MCA in 1984 as a "country comedy" act and thereafter released only novelty song albums. Ray's first two albums for MCA were both hugely successful, both hitting sales of over half a million. His next series of albums were high sellers as well. The fan-voted Music City News awards named Stevens Comedian of the Year annually for 9 consecutive years from 1986 to 1994. Ray's singles were no longer making the Top 40 charts as they were comedy/novelty and country radio resisted playing songs that weren't serious. Even though it meant little airplay, the sales and overall popularity Ray was enjoying during the 1980s and into the 1990s because of the switch to all-comedy was a runaway success. His newer and younger fans bought many of the greatest hits albums MCA and other record labels had released during the 1980s.

A few of Ray's commercial singles charted on the Single Sales charts during this time, but only one single actually made it to the radio-dominated Top 40, "Mississippi Squirrel Revival" reached the Top 20, making that Ray's final single to hit the Top-40 portion of the country chart. "Would Jesus Wear a Rolex" is the only single during his 1984-1989 stint on MCA that came close to reaching the Top 40, stalling at #41 in 1987. Second to that, the other single close to hitting the Top 40 on the country chart was the #45 hit "The Haircut Song".

Ray left MCA in 1989 for Curb/Capitol in 1990. The two labels split apart after a few years joined together and Ray continued with Curb Records afterwards.

Ray's last chart record on the country charts came in 2002 with "Osama Yo' Mama" which made the Top 50 and became Ray's first gold record since "The Streak" in 1974.