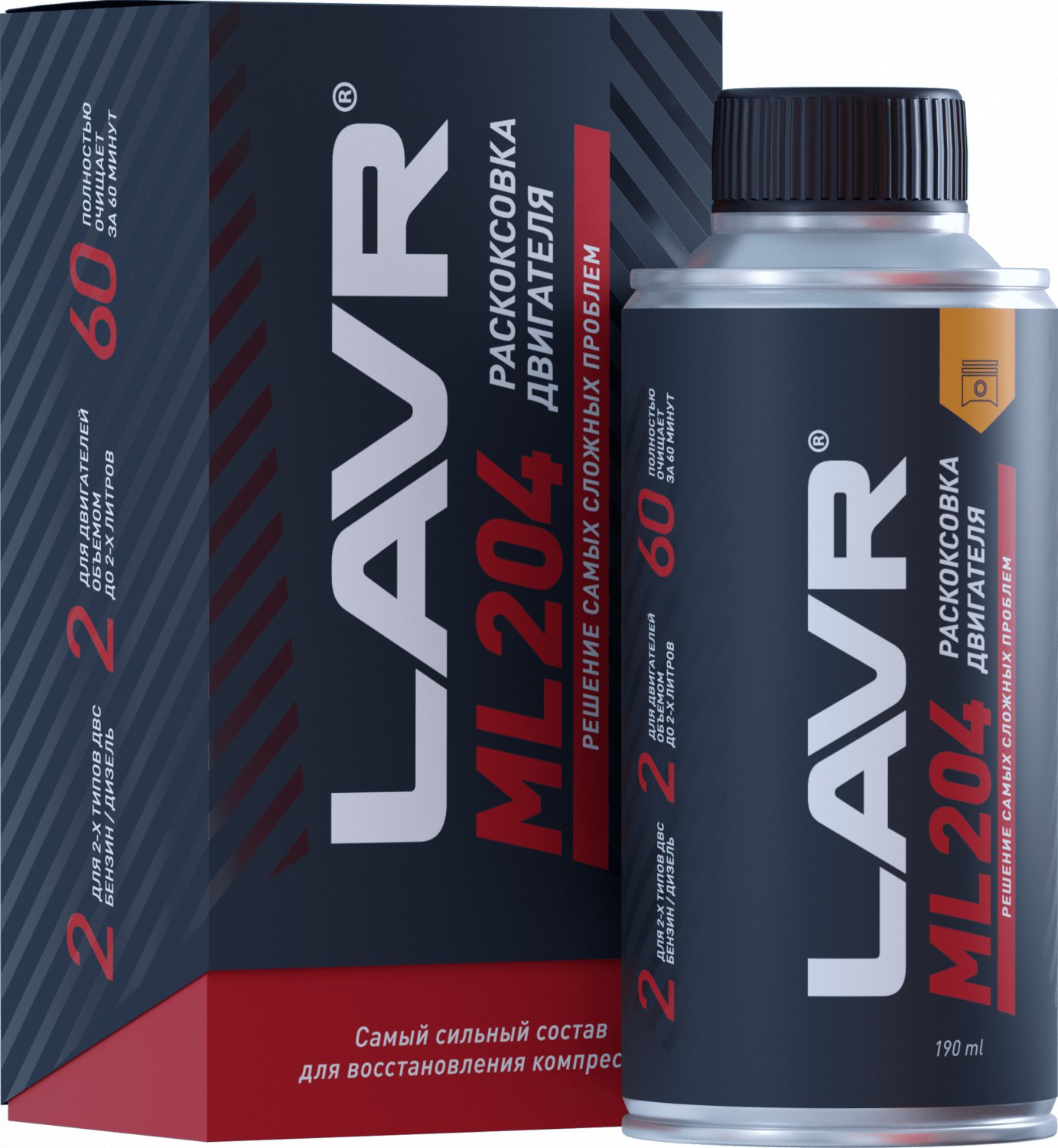 The new decoking ML204 LAVR can solve the most serious engine problems. There has never been such a powerful lineup on the market! When all other products fail, ML204 restores the mobility of the most coked piston rings.
You definitely need decarbonization if
- power has significantly decreased
- acceleration and dynamics worsened
- the car began to smoke
- the engine consumes oil
- you spend a lot of time in traffic jams.

LAVR ML204's unrivaled de-coking formula breaks down tough sludge and carbon deposits to tackle your toughest problems. In just 1 hour, decarbonization cleans heavy soot and sludge from
- piston crowns
- compression and oil scraper rings
- oil drainage channels.
The composition has the strongest cleansing properties, maximum penetrating power. Moreover, it has a neutral odor, which makes it possible to work in closed rooms. The packaging is designed for decoking a four-cylinder in-line engine with a volume of more than 2 liters, as well as if the engine is tilted, V-shaped, opposed or the combustion chamber is formed by a significant recess in the piston. After the procedure, an oil change is required.

Regular de-carbonization and maintenance prolong the life of the vehicle. Please note that only LAVR has a full line of decarbonizers for solving different tasks:

If the consumption of fuel or oil increases, do not hesitate, use the LAVR EXPRESS decarbonizer immediately. One is simple to use and does not require an oil change. As a result, your engine will be protected from carbon deposits.
If the question is in returning the lost power, cleaning the entire cylinder from carbon deposits, but at the same time there is no oil consumption, or minimal, then your option is LAVR COMPLEX foam decoking.
It is necessary to cope with oil consumption, de-carbonize the compression and oil scraper rings - use de-carbon ML202 or ML203.

Application:
1. For the best effect of the drug, warm up the engine to operating temperature (at least 70 ° C).


3. For a gasoline engine - remove the spark plugs. For diesel - glow plugs or injectors.

4. Bring the pistons to a near-center position by turning the crankshaft using the pulley nut or using the drive wheel in gear (on vehicles with a manual transmission). The position of the pistons can be determined through the technological holes with a long dipstick (for example, an oil one).

5. Drain the oil from the engine into a clean container (later it will be used for flushing the engine) and dismantle the oil pan.

6. Using a syringe with an extension tube, pour an equal amount of liquid into each cylinder. Close the process openings (for example, screw the spark plugs a few turns) to create a "steam bath" in the combustion chambers.

In order for the liquid to better seep into the area of ​​the piston rings, it is recommended to periodically slightly move the pistons up and down.

If a large amount of liquid remains in the cylinders, the exposure time can be increased to 90 minutes.

8. Clear the technological holes and remove the remaining liquid as much as possible with a syringe with an extension tube. With a clean cloth, wipe the crankcase and engine walls dry to remove traces of cleaning fluid.

9. Perform the procedure for purging the cylinders with compressed air (up to 4 atm.)

11. Fill the engine with the previously drained engine oil. Follow the cylinder purging procedure: Cover the access holes with a thick cloth to prevent splashing of the drug residues. Fully depress the accelerator pedal and crank the engine shaft with the starter 1-2 times for 5 seconds.

When the starter cranking the engine with the power system on, fuel is supplied to the cylinders, the vapors of which can accumulate in the exhaust system and cause the fuel in the resonator to ignite when the engine is started. Therefore, on engines with a volume of more than 2000 cm³, it is recommended to turn off the fuel supply system.

12. Install the dismantled units and parts. Make sure the assembly is correct.

13. Start the engine and warm it up to operating temperature.

14. Stop the engine and remove the used oil from the engine as much as possible using the most efficient method for your vehicle.

15. Change the oil filter and fill with new oil.

After cleaning the first 10-20 kilometers, do not load the engine with high revs.
Use with caution for decoking engines with extreme wear and heavily contaminated lubrication system!
... [Full Description]

Other Products from autodoctorrussia (View All)