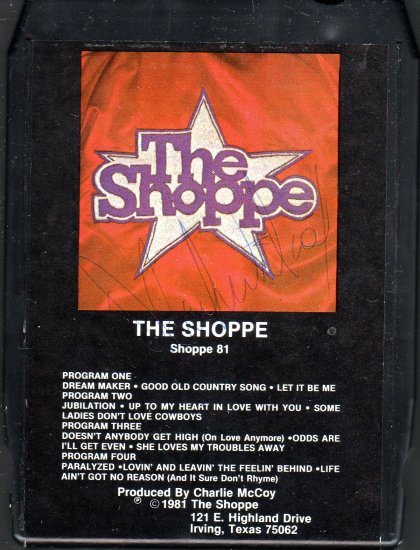 The band's highest charting single, "Doesn't Anybody Get High on Love Anymore," reached the Top 40 on the Billboard Hot Country Singles chart in 1981.[1] They were signed to MTM Records in 1985 and released one album, The Shoppe, which charted on the Billboard Top Country Albums chart and led to appearances on The Nashville Network.[1][2]

For almost two decades, The Shoppe toured extensively throughout the United States before disbanding in the latter half of the 1980s.

For many years The Shoppe was a mainstay at the Puyallup Fair, performing several times a day.

In 2012 The Shoppe reunited for a reunion run at the Puyallup Fair, from September 17th to September 23rd.

This copy looks to be a signed copy by Jack Wilcox on the front cover. Comes with splice, pads and a 7 day money-back guarantee.
... [Full Description]