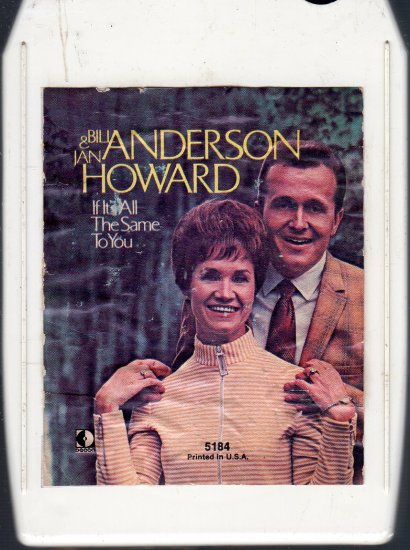 Tweet
Lula Grace Johnson (born March 13, 1930), better known as Jan Howard, is an American country music singer and Grand Ole Opry star. She was one of country music's trailblazing female vocalists during the height of her career in the mid-1960s. Her ex-husband was singer-songwriter Harlan Howard.

Howard's biggest hit and signature song is the 1966 country hit, "Evil on Your Mind," included in the book, Heartaches By the Number: The 500 Greatest Country Music Singles. In the late 1960s and early 70s, she dueted with Bill Anderson on a number of top 10 hits, including the number one hit, "For Loving You."

In the early 1970s, Howard paired up again with Bill Anderson for a series of duet singles. In 1970, their song, "If It's All the Same to You" hit number 2 on the country charts that year, just missing the top spot. Their album of the same name was released that year also. Soon, Howard and Anderson were one of the biggest duet groups of the early 70s, racking up two other Top 10 Country hits between 1970 and 1971. Their 1970 album Bill and Jan or Jan and Bill spawned their other two Top 10 country singles, "Someday We'll Be Together" (1970) and "Dis-Satisfied" (1971). In 1968 and 1970, the duet pair were nominated for Vocal Duo of the Year by the CMA Awards, but never won the award.

Shortly after the success Howard had with Anderson, she went back to recording as a solo artist again. However, this time she wasn't as successful as she was in the 60s. She had one other Top 40 hit, which was released in 1972 titled "Love is Like a Spinning Wheel", which only reached No. 36. Another single from the album of the same name of her Top 40 hit didn't even chart the Top 40. In 1973, Howard joined The Johnny Cash Show, and continued to release minor hits up until 1978. Her last charting single, released in 1978, was "To Love a Rolling Stone".

Howard was also an experienced songwriter. In 1966, she wrote the Kitty Wells hit "It's All Over But the Crying", and in 1970 she wrote the Bill Anderson hit "Love Is a Sometimes Thing". Together, Bill and Jan wrote the 1970 Connie Smith hit "I Never Once Stopped Loving You". Jan also co-wrote "Dis-Satisfied" with her son Carter. Four years after her son's death (1973), Howard's other son David committed suicide. Throughout her career, Howard has been nominated for countless Grammy awards and CMA awards, but has yet to win either. Jan Howard placed 30 singles on 'Billboards country music charts between 1960 and 1978. In 1979, Howard and Tammy Wynette went on a tour throughout the United States and Great Britain.

One of the most successful songwriters in country music history, Anderson was also a popular singer, earning the nickname Whispering Bill for his soft vocal style and occasional spoken narrations. Artists who have recorded his material include Ray Price, Connie Smith, Jim Reeves, Kenny Chesney, and George Strait.

Anderson has made several television appearances, including two stints as a game show host: The Better Sex (with co-host Sarah Purcell) in 1977, and the country music-themed quiz show Fandango (1983-1989) on The Nashville Network. He has also hosted an interview show called Opry Backstage and was a producer of a talent show called You Can Be a Star, hosted by fellow Opry member Jim Ed Brown, both shows on the former Nashville Network, and has made guest appearances on several other television series.