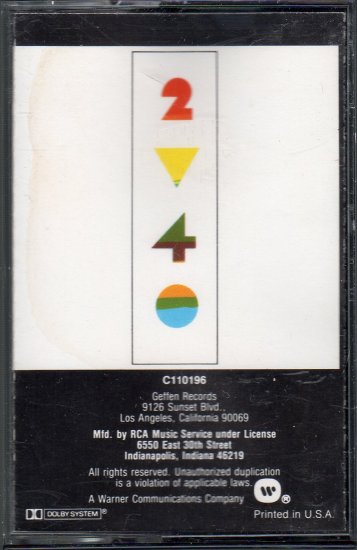 Tweet
Too Low for Zero is the seventeenth studio album by British singer/songwriter Elton John, released in 1983. For the first time since Blue Moves in 1976, all lyrics were written by Bernie Taupin, who has continued in this role to the present day. At the insistence of Taupin, Elton decided to go back to basics and returned to working with Taupin full time. Elton also reunited with the core of his backing band of the early 70s: Dee Murray, Nigel Olsson and Davey Johnstone as well as Ray Cooper, Kiki Dee and Skaila Kanga (who played harp on Elton John's Self-titled album). The album was produced by Chris Thomas and recorded at Air Studios in Montserrat (the same studio for Jump Up!) and Sunset Sound Recorders in Hollywood. The original LP issue of the album featured a die-cut cover with a special inner sleeve. The four shapes shown on the cover were cut out, with the colours (shown as ink smears on the inner sleeve) showing through the holes. No CD release to date has duplicated these die-cuts. For the first time since Empty Sky, Elton plays all the keyboards on this album and he would do the same on Breaking Hearts.

All b-sides released on US singles from this time originate from the 1980 21 at 33 sessions. They were also previously released on European singles.