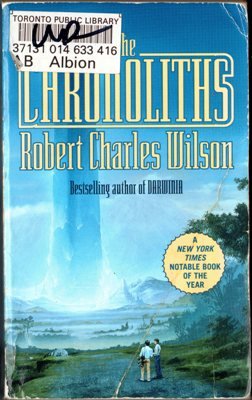 In early twenty-first-century Thailand, Scott is an expatriate slacker. Then, one day, he inadvertently witnesses an impossible event: the violent appearance of a 200-foot stone pillar in the forested interior. Its arrival collapses trees for a quarter mile around its base, freezing ice out of the air and emitting a burst of ionizing radiation. It appears to be composed of an exotic form of matter. And the inscription chiseled into it commemorates a military victory sixteen years in the future.

Shortly afterwards, another, larger pillar arrives in the center of Bangkok obliterating the city and killing thousands. Over the next several years, human society is transformed by these mysterious arrivals from, seemingly, our near future. Who is the warlord "Kuin" whose victories they note?

Scott wants only to rebuild his life. But some strange loop of causality keeps drawing him inn, to the central mystery and a final battle with the future.