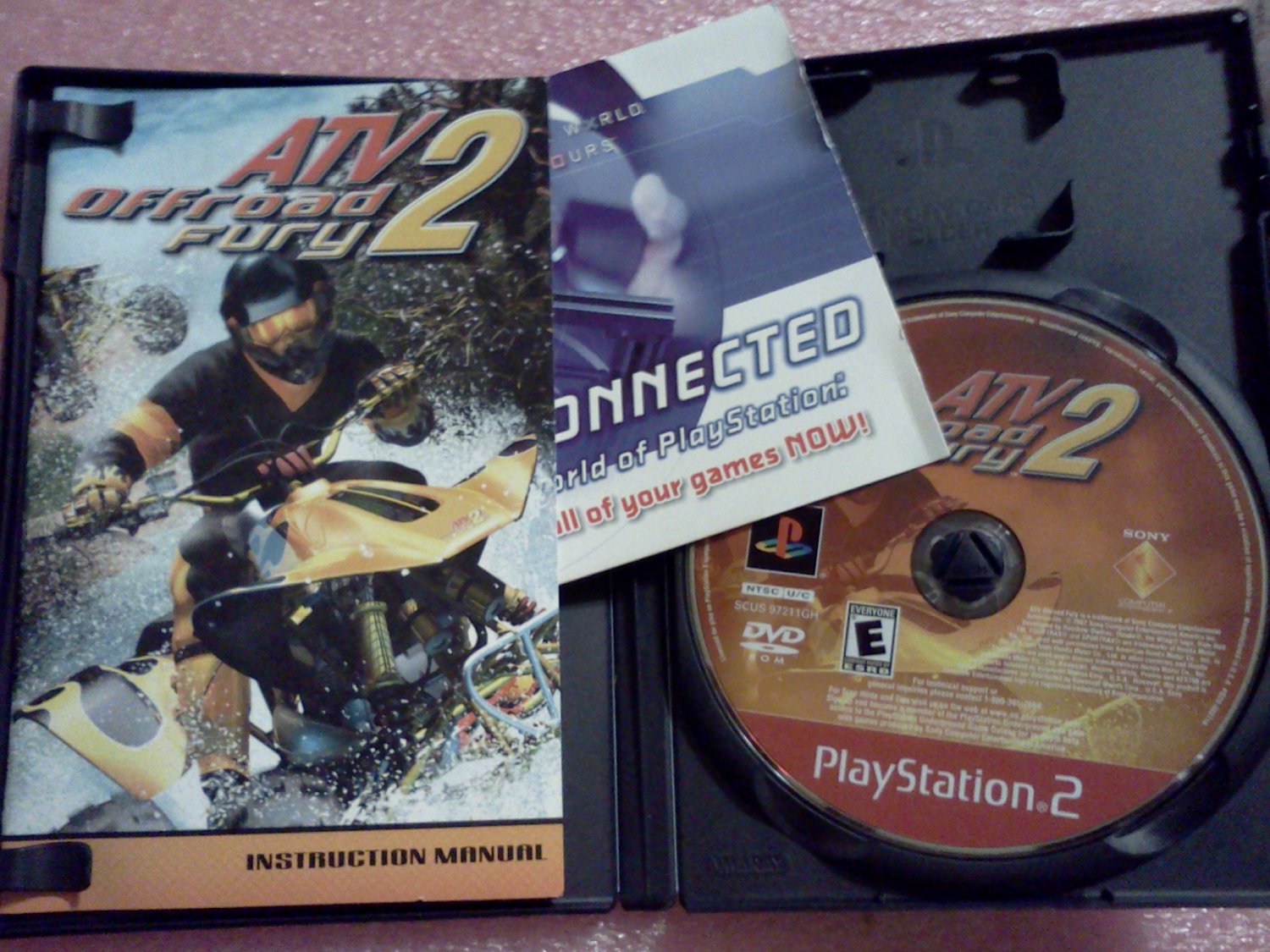 Tested, Complete, Disc does have light wear but seems to play fine.

Product Information
As the second installment in the ATV Offroad Fury series of games, ATV Offroad Fury 2 brings even more action to the Sony PlayStation 2 (PS2). This new ATV Offroad Fury game packs twice as much of everything, giving you double the vehicles and letting you plow through twice as many environments for hours of racing fun. Whether you’re darting between the trees or plunging into water, you’ll have plenty of chances to show off your best tricks and prove that you’re the best off-road racer around. ATV Offroad Fury 2 was developed by Rainbow Studios and published by Sony Computer Entertainment. Released in 2002 for the PS2, the game received positive reviews and found a warm welcome with racing game fans, especially those with a fondness for intense action in their video games. A combination of tough terrain and even more competitive play challenges gamers to bring their best driving skills to the track. With more than 20 vehicles to choose from, you’re sure to find the off-road vehicle for you. ATV Offroad Fury 2 for PS2 features an expanded selection of ATVs, including the Ravage Talon, all of which can be unlocked as you progress through the game and win more races. You have three types of races to ride: endure, nationals, and supercross. In order to gain access to more features, you’ll need to hone your skills on all of the tracks and truly learn each one. The free-ride and practice modes are great for this, giving you the chance to race around each track without the pressure of a real competition. Other modes include the freestyle mode, where you perform various tricks and stunts to gain points, as well as a lap attack mode that pitches you against your own best lap time. As long as you’re in one of the single-player modes, you’ll be able to earn points towards more courses, vehicles, and gear, although the championship races are where you get the biggest rewards. You always have the option of running a race as a one-off, but if you race through a championship series, you’ll have a much better chance of earning that unlockable you’ve got your eye on. ATV Offroad Fury 2 for PS2 also offers a range of multiplayer options, including online play. The game supports split-screen, i.Link, and LAN play so you can race against friends right in your living room or you can challenge another player in the online community. There are several mini games available in multiplayer, including king of the hill and a treasure hunt mode. Compete against three other players across a range of modes, or simply race against the clock as you try for a new record on your favorite track. There are several cheats available, making it easier to unlock the items you want. To get the full experience, however, set aside the cheats, and plunge wheel-first into the game. ATV Offroad Fury 2 for PlayStation 2 packs new vehicles, challenging tracks, and more multiplayer options into a racing game that will keep you on the edge of your seat.

Race against friends in split-screen, i.Link, LAN, or online play

Licensed soundtrack featuring System of a Down, Korn, Logan 7, and more