Hanging Out with different agenda's - Ted Ingram Circa 1950 Original Artwork 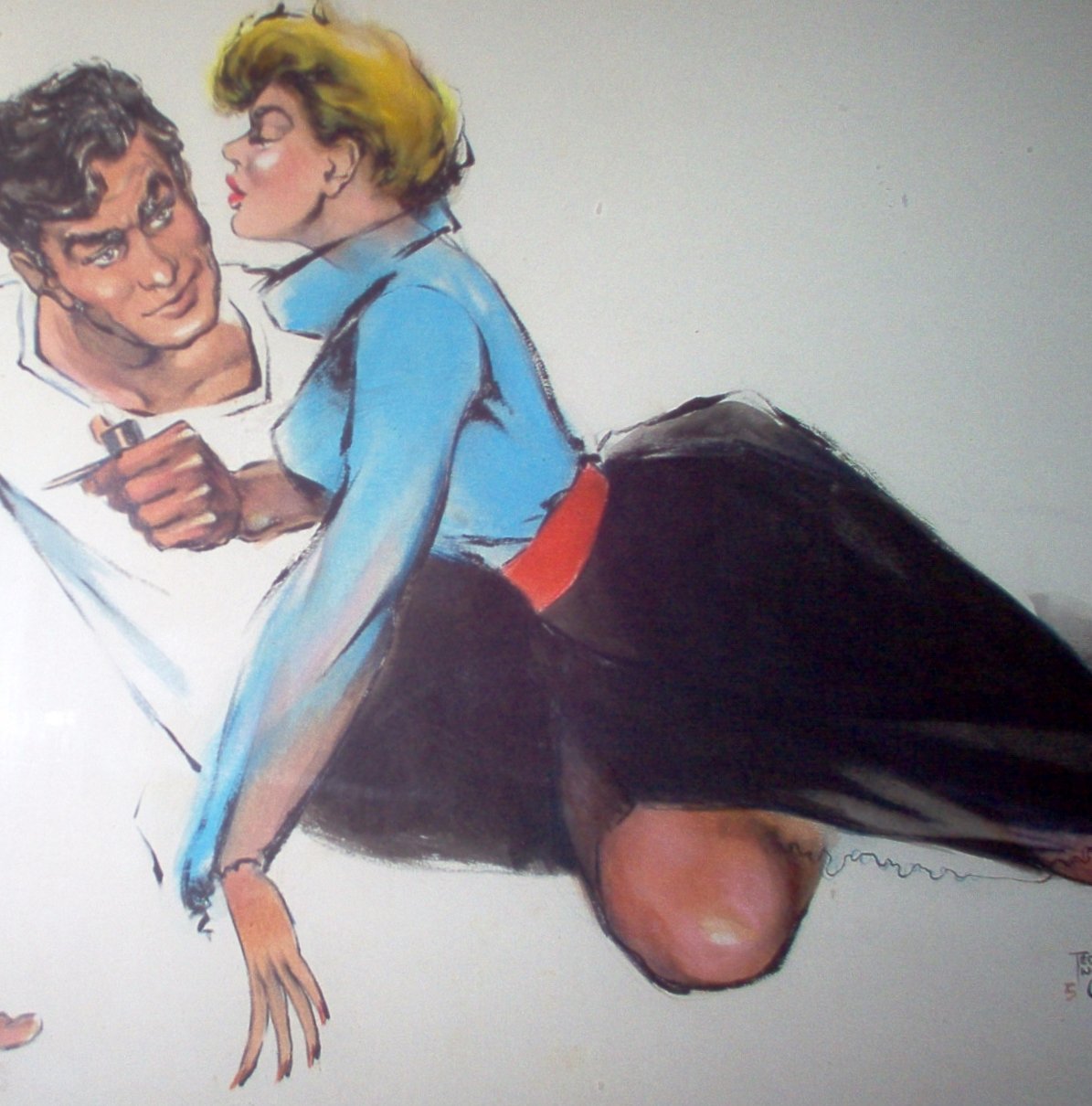 Tweet
Hanging Out with different agenda's
© DEIngram
- Ted Ingram Circa 1950

A.E.Ingram (1921-1986)
-Arthur (Ted) Ingram, a child prodigy, a World War II veteran, an OCA (Ontario College of Art; Toronto, Ontario, Canada) graduate, illustrator, artist, sculptor, visionary, husband and father. Arthur Edward (Ted) Ingram was all of these and more.
-During his 65 years, Ted Ingram exhibited an insatiable appetite for all things creative. His artistic talent was recognized by the local media and area organizations (he won a scholarship at an early age from the IODE) in Saint John, New Brunswick (Canada), where he was born and raised. During his formative years he lived in England with relatives where his talent was nurtured and encouraged.
-Ingram joined the Royal Canadian Air Force where he served as an air gunner (409 Squadron), before being honourably discharged in 1942 after suffering post-war trauma.
-His later works reflected his hatred of war and the resulting aftermath: rape, destruction, inhuman suffering, violence and despair.
-Winning a federal government competition later led him to a fine arts position at the National Museum of Canada in Ottawa where he spent more than 20 years focused on North American Indian and Inuit art.
-His work has appeared in publications by anthropologists; Diamond Jenness, Marius Barbeau, Larry Oschinsky and Tom Lee, well-respected American Native Indian authorities in their respective fields.
-Among his many dioramas was a well-known one exhibited at Ste Marie among the Hurons in Midland Ontario.
-In the early sixties Ted Ingram visited Povungnituk in northern Québec with anthropologist Eugene Arima to record the life of the Inuit at that time. He remarked then that the white man was destroying the Inuit way of life and one-ness with Nature.
****Ted was considered by many as a "sleeper", with a talent many compared to the 'masters' of the Italian Renaissance Period, with his sculptors and dioramas and to the Vargas' and Nieman's for his illustrations and voluptuous women. ALL artwork is original.****

-Ted Ingram was a tortured man. His post-war trauma led him on a lifelong journey seeking inner peace which never came. Increasingly his later modern-style work reflected the demons in his mind.
-Ted Ingram was an artist in the purest sense. He lived, breathed and created art as an extension of his reason for being. He died April 4, 1986
***Please note that illustrations have had a rather ambitious time weathering the ages, and some show an assortment of different smudges, etc. These drawings/sketches/illustrations/paintings have been squirreled away for many years, and are just now coming out to the public. All of the work is sold as is and will be properly packaged and insured to your gallery or home. Any matting, cleaning and framing is the purchasers responsibility. ****


***You are having an opportunity to purchase one of a kind artwork, by an artist, whose pieces have rivaled and exceeded many of the masters of yesteryear, and have certainly stood the test of time.
... [Full Description]