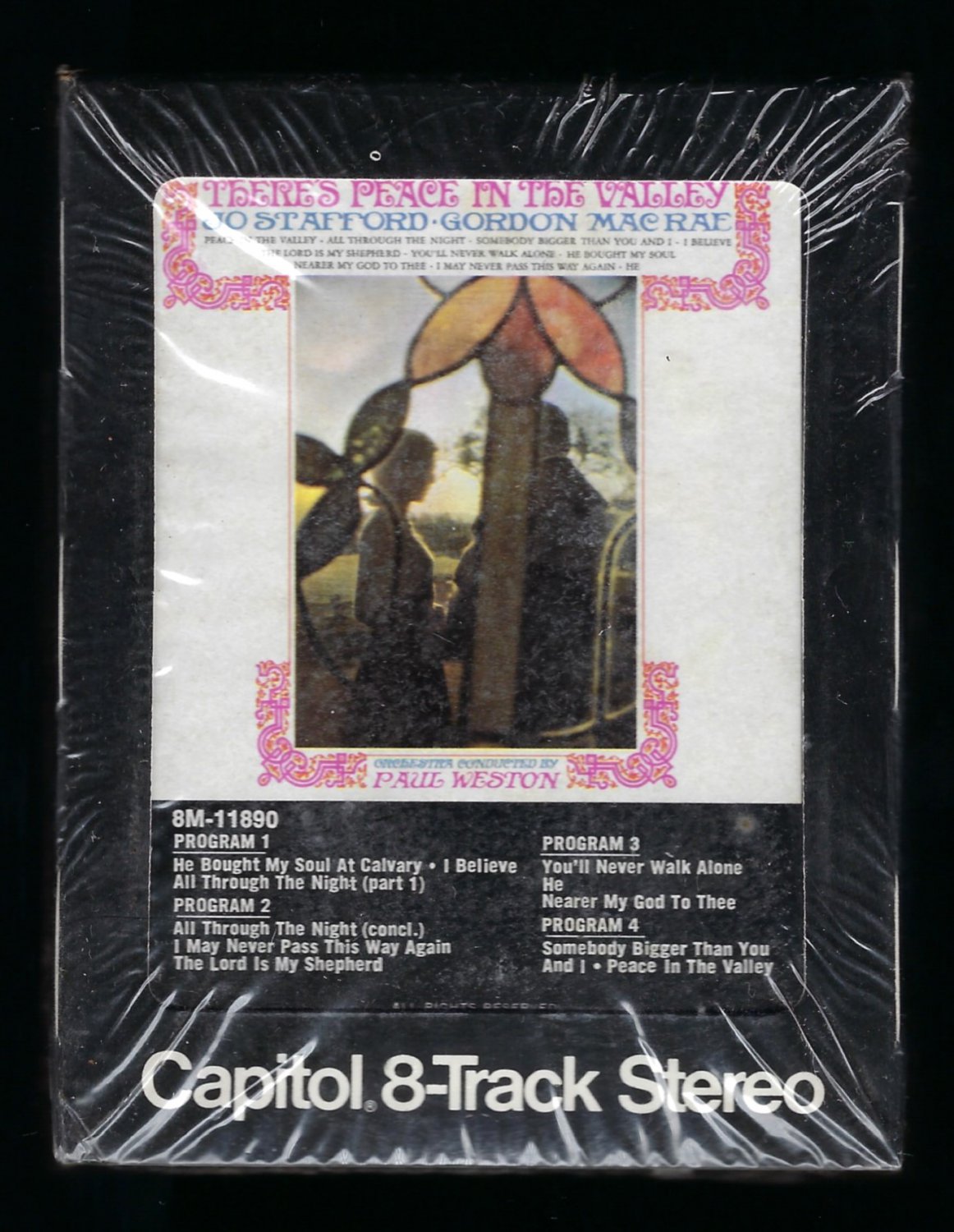 Tweet
Peace in the Valley is a 1963 album by Jo Stafford and Gordon MacRae.

Jo Elizabeth Stafford (November 12, 1917 – July 16, 2008) was an American traditional pop music singer and occasional actress, whose career spanned five decades from the late 1930s to the early 1980s. Admired for the purity of her voice, she originally underwent classical training to become an opera singer before following a career in popular music, and by 1955 had achieved more worldwide record sales than any other female artist. Her 1952 song "You Belong to Me" topped the charts in the United States and United Kingdom, becoming the second single to top the UK Singles Chart and the first by a female artist to do so.

Born in remote oil rich Coalinga, California, near Bakersfield in the San Joaquin Valley, Stafford made her first musical appearance at age 12. While still at high school, she joined her two older sisters to form a vocal trio named the Stafford Sisters, who found moderate success on radio and in film. In 1938, while the sisters were part of the cast of Twentieth Century Fox's production of Alexander's Ragtime Band, Stafford met the future members of the Pied Pipers and became the group's lead singer. Bandleader Tommy Dorsey hired them in 1939 to perform back-up vocals for his orchestra.

In addition to her recordings with the Pied Pipers, Stafford featured in solo performances for Dorsey. After leaving the group in 1944, she recorded a series of pop standards for Capitol Records and Columbia Records. Many of her recordings were backed by the orchestra of Paul Weston. She also performed duets with Gordon MacRae and Frankie Laine. Her work with the United Service Organizations giving concerts for soldiers during World War II earned her the nickname "G.I. Jo". Starting in 1945, Stafford was a regular host of the National Broadcasting Company (NBC) radio series The Chesterfield Supper Club and later appeared in television specials—including two series called The Jo Stafford Show, in 1954 in the U.S. and in 1961 in the U.K.

Stafford married twice, first in 1937 to musician John Huddleston (the couple divorced in 1943), then in 1952 to Paul Weston, with whom she had two children. She and Weston developed a comedy routine in which they assumed the identity of an incompetent lounge act named Jonathan and Darlene Edwards, parodying well-known songs. The act proved popular at parties and among the wider public when the couple released an album as the Edwardses in 1957. In 1961, the album Jonathan and Darlene Edwards in Paris won Stafford her only Grammy Award for Best Comedy Album, and was the first commercially successful parody album. Stafford largely retired as a performer in the mid-1960s, but continued in the music business. She had a brief resurgence in popularity in the late 1970s when she recorded a cover of the Bee Gees hit, "Stayin' Alive" as Darlene Edwards. In the 1990s, she began re-releasing some of her material through Corinthian Records, a label founded by Weston. She died in 2008 in Century City, Los Angeles, and is interred with Weston at Holy Cross Cemetery, Culver City. Her work in radio, television, and music is recognized by three stars on the Hollywood Walk of Fame.

Albert Gordon MacRae (March 12, 1921 – January 24, 1986) was an American actor, singer and radio/television host who appeared in the film versions of two Rodgers and Hammerstein musicals Oklahoma! (1955) and Carousel (1956) and who played the leading man opposite Doris Day in On Moonlight Bay (1951) and sequel By The Light of the Silvery Moon (1953).