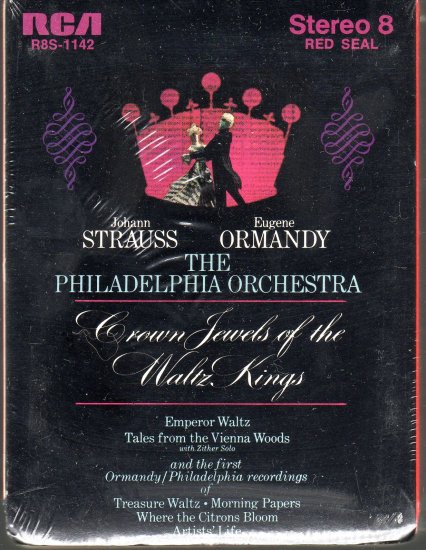 Tweet
Eugene Ormandy (born Nov. 18, 1899, Budapest, Austria-Hungary — died March 12, 1985, Philadelphia, Pa., U.S.) Hungarian-born U.S. conductor. A violin prodigy, he became professor of violin at the Budapest Royal Academy at age 17. In 1921 he went to New York City, where he played in and conducted a theatre orchestra; he gained national prominence as conductor of the Minneapolis Symphony Orchestra (1931 – 36). He shared conductorship of the Philadelphia Orchestra with Leopold Stokowski for two years before becoming sole conductor in 1938, and he led the orchestra until he was made laureate in 1980. Ormandy shaped the orchestra's sound by developing the lush, velvety string colour that became its trademark, and the orchestra made scores of recordings under him.
Johann Strauss Jr. was born in Vienna, Austria, on 25 October 1825, to the famous composer Johann Strauss I. His father did not want him to become a musician but rather a banker; nevertheless, Strauss Junior studied the violin secretly as a child, ironically with the first violinist of his father's orchestra, Franz Amon. When his father discovered this, Johann the younger recalled that "there was a violent and unpleasant scene" and that "his father wanted to know nothing of his musical plans." It seems that rather than trying to avoid a Strauss rivalry, the elder Strauss only wanted his son to escape the rigors of a musician's life. It was only when his father left the family and took a mistress, Emilie Trampusch, when the son was 17, that he was able to concentrate fully on a career as a composer with the support of his mother.

Strauss II studied counterpoint and harmony with theorist Professor Joachim Hoffmann, who owned a private music school. His talents were also recognized by composer Josef Drechsler, who taught him exercises in harmony. His other violin teacher, Anton Kollmann, who was the ballet répétiteur of the Vienna Court Opera, also wrote excellent testimonials for him. Armed with these, on the very same day his mother filed a divorce from her husband, he approached the Viennese authorities to apply for a license to perform. He initially formed his small orchestra where he recruited his members at the 'Zur Stadt Belgrad' tavern, where musicians seeking work could be hired easily.

Johann Strauss I's influence over the entertainment establishments meant that many of them were wary of offering the younger Strauss a contract for fear of angering the father. Strauss Jr. was able to persuade the Dommayer's Casino in Hietzing (a suburb of Vienna) to allow him to perform. As a result, the local press was soon frantically reporting a 'Strauss v. Strauss' rivalry between the father and the son. The elder Strauss, in anger at his son's disobedience, and at that of the proprietor, refused to ever play at the Dommayer's Casino again, which had been the site of many of his earlier triumphs.

Strauss II found the early years difficult, but he soon won over music-loving audiences after accepting commissions to perform away from home. The first major appointment for the young composer was his award of the honorary position of "Kapellmeister of the 2nd Vienna Citizen's Regiment", which had been left vacant following Josef Lanner's death two years before. Vienna was racked by a bourgeois revolution on February 24, 1848, and the intense rivalry between father and son became much more apparent.


Johann Strauss in his younger yearsEventually, Johann Jr. decided to side with the revolutionaries, as evidenced in the title of his works dating around this period, such as the waltzes 'Freiheitslieder' (Songs of Freedom) op. 52 and 'Burschenlieder' op. 55, and the marches 'Revolutions March', op. 54 and the stirring Studenten Marsch op. 56. It proved to be a decision which was professionally disadvantageous, as the Austrian royalty twice denied him the much coveted 'KK Hofballmusikdirektor' position, which was first designated especially for Johann I in recognition of his musical contributions. Further, the younger Strauss was also arrested by the Viennese authorities for publicly playing the infectious La Marseillaise, which stoked revolutionary feelings, but he was later acquitted. Shortly after that, he composed the 'Geißelhiebe Polka', op. 60, which contains elements of 'La Marseillaise' in its 'Trio' section as a musical riposte to his arrest. The elder Strauss remained loyal to the Danube monarchy, and composed his Radetzky March op. 228 (dedicated to the Habsburg field marshal Joseph Radetzky von Radetz), which would become one of his best-known compositions.

When the elder Strauss died from scarlet fever in Vienna in 1849, the younger Strauss merged both their orchestras and engaged in further tours. Subsequently, he also composed a number of patriotic marches dedicated to the Habsburg monarch Franz Josef I, such as the 'Kaiser Franz-Josef Marsch' op. 67 and the 'Kaiser Franz Josef Rettungs Jubel-Marsch' op. 126, probably to ingratiate himself in the eyes of the new monarch, who ascended to the Austrian throne after the 1848 revolution.